A bit about Me

I decided to attend Southwestern Bible college which is now Arizona Christian University and I hadn't even finished sophomore year before I had a part time job as a Youth Pastor.  It was trial by fire but I loved it.  That position ended up being full time pretty quickly as I took on the responsibilities of Worship Pastor in addition to running the youth group.  I got married in March of 2009 and became a Dad on Sept 22, 2010!  (Side note: my daughter is cuter than yours... Just sayin')

At this point in my life, everything was pretty awesome!  I was living the dream, but in November of 2011 it all blew up.  My marriage fell apart!

As a pastor, I was sure that my life, as I knew it, was pretty much over.  We had tried counseling, and though I was willing to try whatever else it took, she was done.  I was devastated and had pretty much decided that I was going to resign quietly and try to figure something else out.  I had done everything right up to that point. Wife, Kid, Dream job.  But what church wants a divorced pastor on staff?  I had no idea how God was going to use me.  But I was in for the ride of my life.

I went to the leaders of my church and told them where my life was at and they told me that if I tried to resign they would shred my resignation.  My church came around me with love and support in a way that I never could have imagined.  God began to use me in spite of my brokenness and imperfection.

My life was no longer the perfect Mona Lisa type portrait that I had worked so hard to build but I realized something profound.  Though my life was covered in smudges and spilled paint from a divorce, God was still working on my as he painted an abstract masterpiece.

My Story is not about a broken home, or a failed marriage.  My story is about the faithfullness of God. 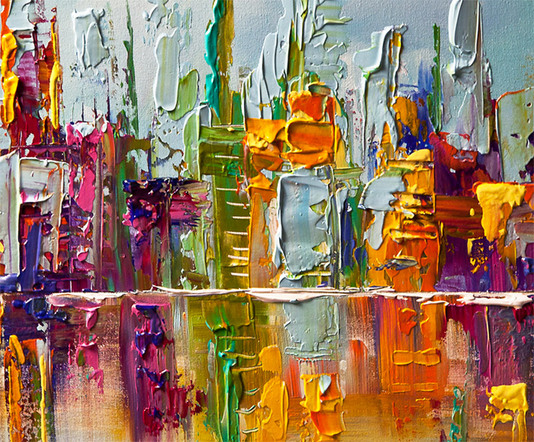 One of my favorite paintings.
Powered by